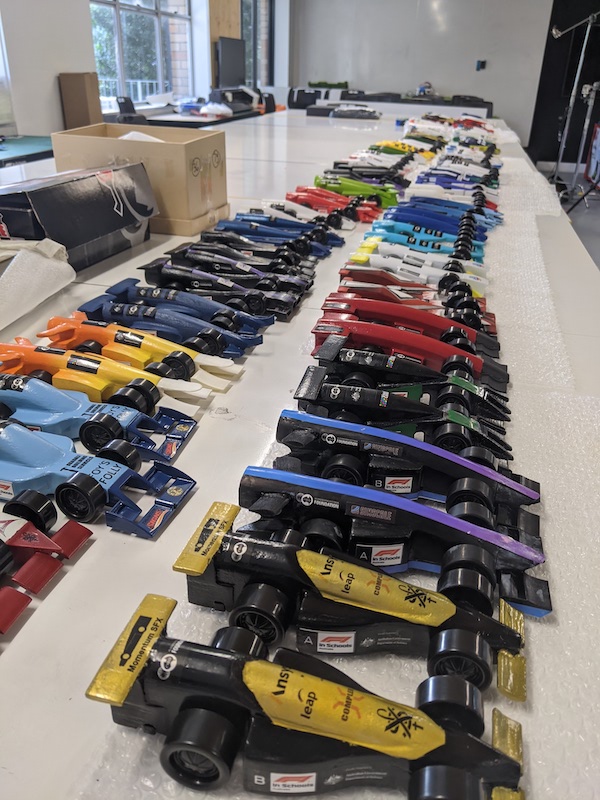 On Tuesday, 4th November, the tracks were set up to mark the start of the State Finals of F1 in Schools 2020. For the first time, all Australian State Finals are being held at the same time, on the same track. Of course, with true Marist hospitality, we have looked after our friends at REA (Re-engineering Australia), and the film crew they have brought with them.

F1 in Schools the only global multi-disciplinary challenge in which teams of students aged 9 to 19 deploy CAD/CAM software to collaborate, design, analyse, manufacture, test, and then race miniature compressed air powered cars made from F1 model block.

This year's competition is virtual, meaning that no student teams are on site, but their cars are still being raced in a controlled environment, on a high precision track. While the racing isn't being streamed, a professional film crew is carefully documenting the racing, and conducting interviews with teams, teachers and judges to produce a 90 minute production which will provide a sense of excitement felt by those involved in this prestigious STEM competition. The film will be released online in the coming weeks.

We are proud that three Parramatta Marist teams qualified for the NSW State Final by performing to a high standard at the Western Sydney Regional Finals.

So far, the Cadet's Class has been raced, along with the Jnr Professional division (Pro teams in Year 9 or earlier). The racing has been tight, and team Tempest fared well. We await official results.

Congratulations to all teams who have made it this far in the F1 in Schools competition. We also thank our major sponsors, Precision Metal Group and Lincoln Electric.