Above: Our Marist teams at the Subs in Schools State Finals

On Friday, 27 November, 18 Parramatta Marist students competed in the NSW Finals of Subs in Schools, with wonderful success.

The Subs in Schools Technology Challenge fosters STEM skills, with a view to contribute to the skills of our future workforce. The Department of Defence is a key stakeholder in this competition, and we are well supported by our major sponsors, Precision Metal Group, who are a key manufacturer of National Defence steel assets.

Our four student teams created a remote operated vehicle (ROV) to complete a “sea trial”, as outlined by the diagram below.

Each team is given ten minutes to retrieve 3 objects, obtain a hidden code and push a 20mm button during their ROV’s underwater mission. To give you a sense of the sea trial’s difficulty, at last year’s National Final, only two teams managed to complete all five tasks in the allotted maximum time of ten minutes. The record time for the sea trials was set by the Sea Mariners in 2019, with an astounding total time of 3 minutes, 50 seconds for the entire course. Our teams witnessed this feat in Adelaide last year. We have remained in awe ever since.

While watching other teams complete their first of two sea trials, our students spoke of their nerves.
“I don’t know why I’m soo nervous. I know we’ve got this”, said Sebastian Sammut as his team approached the judges with their ROV. Brendan, his teammate, reminded him that they have two attempts, so not everything rides on round one. This seemed to help.

In the first round, Sebastian Sammut, Brendan Pospischil and Ray Bourchdan of team Proteus retrieved all three objects, and found the code in the wreck in their first attempt, but had significant trouble with the underwater button press. Team Typhoon, piloted by Alec Jorquera on the other hand, pressed the button on their first approach, but failed to grasp the third object, a pvc cube. Team Doozy (Jonathan Bejjani, Christopher Taouk, Michael Barakat and Connor Younnes) managed to retrieve the hidden code, but an unfortunate buoyancy issue prevented further progress. Team Poseidon (Jarod Mazlin, Cammilus JB, Jordan Sathi and Shane Culas) picked up three objects, retrieved the code, but like many teams before them, couldn’t achieve the accuracy required to press the button within the allotted ten minutes. Despite the mixed results, it was wonderful to finally see the teams in the midst of a physical competition.

With one attempt remaining, and after witnessing a team from Frensham complete all five missions in an excellent time of 8 minutes and 6 seconds, Alec Jorquera was keen to apply what he had learned from his first attempt. 3 minutes and 30 seconds later, Alec was grinning ear to ear, as he had posted the quickest time of the meet, which also surpassed the National record from 2019.

Team Proteus then completed all missions in 7 minutes and 6 seconds. This secured second place in the sea trials for a team who has thoroughly prepared all other project elements.
“That result should get us close to winning the overall point score”, said Brendan Pospischil.

Finally, team Poseidon placed their ROV in the pool. They immediately retrieved two objects, but took longer to locate the code and pick up the pvc cube. With two minutes remaining, they attempted the button press.
Controlling the ROV from above the surface, Jarrod Mazlin vented his frustration, “Refraction you evil thing! Why won’t you let us see straight!”
In the final countdown, Jarod and Cammilus managed to make the micro adjustments needed to thread the needle. Covid safe celebrations ensued.

With portfolios and virtual presentations being marked this week, overall results are pending. We anxiously await overall classification for our Professional ROV teams, Proteus, Typhoon and Doozy, & Development Class Team, Poseidon. Credit also must go to Kirpatrick Manalansan, who spent the vast majority of the day fixing problems for his, and other teams. His portfolios were also recognised by the judges as being of a consistently high standard. The judges were sad to see that Kirpartick’s ROV has a shorting issue in its control box, which wasn’t rectified before the Sea Trials. In any case, Kirkpatrick’s relentless fight to get his ROV operational, typifies the wonderful determination displayed by our students throughout this competition.

A huge thanks must go to our major sponsors, Precision Metal Group for allowing our boys to test and practice piloting their ROVs in the glass tank they delivered to PMHS. It’s clear that every moment of preparation was required for our teams to experience the success they just experienced at the NSW Finals. It’s wonderful that we have Old Boys like Adam Hendry and Jason Elias looking to open up new and exciting opportunities for our boys. 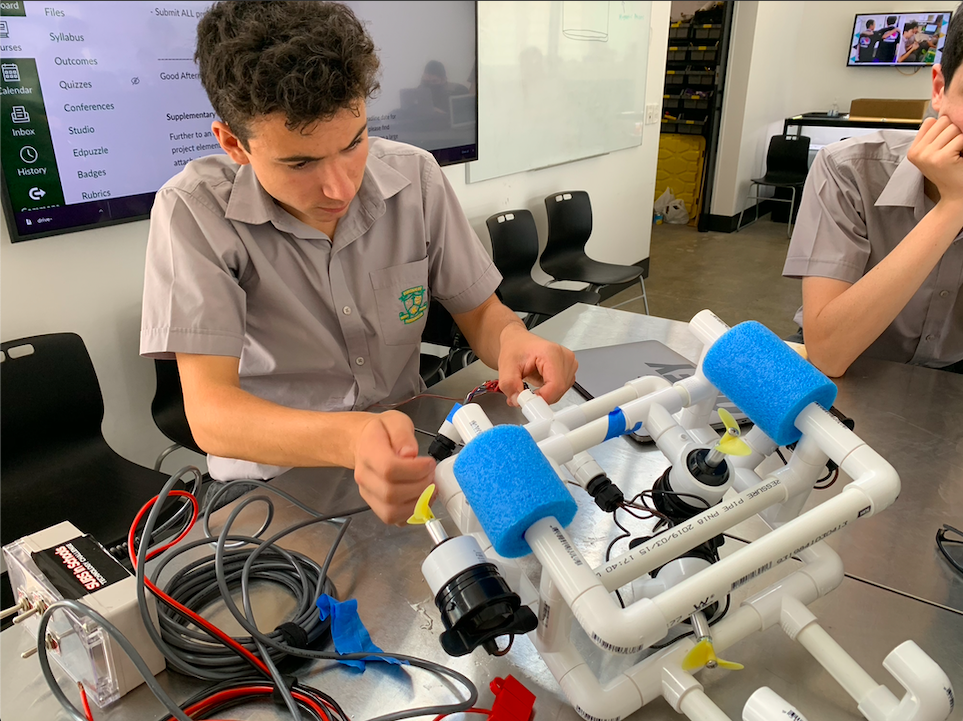 Above: Testing in the PMG glass tank Above: Alec prepares for his first sea trial Above: Alec practices maintaining a steady depth while completing maneuvers.