The Old Boys Union would like to extend its condolences to the family, friends and classmates of  Professor Michael Gracey. AO MD PhD, FRACP, FAAP. Michael recently passed away after a long illness.

Michael Gracey completed his Leaving Certificate (the equivalent of Year 12) at Parramatta Marist Brothers in 1955 and graduated in Medicine from Sydney University in 1961. Michael went on to become a paediatrician by training in hospitals and clinics in Sydney, Melbourne and Papua New Guinea before doing child health research in London and Birmingham. His fields of expertise were in child nutrition and growth and infectious diseases. Returning to Australia in 1970, Michael worked extensively with Aboriginal children and their families, particularly in remote and very remote areas in the far north of Western Australia; later becoming the Principal Medical Adviser on Aboriginal Health to the WA Government. In 1997, Michael was made Australia’s first Professor of Aboriginal Health.

Michael became interested in the health of infants and children in developing countries and in poorer sections of otherwise wealthy countries, like Australia. This led him to work for many years with the International Paediatric Association (IPA) which has 600,000 members in more than 100 countries. Subsequently, Michael became the first Australian to be made the President of the IPA; his responsibilities took him to dozens of countries on all of the world’s inhabited continents and involved him with work with the World Health Organization (WHO) and UNICEF.

Until his health began to fail him, recently he continued to be involved in international health by teaching young doctors and nurses in Vietnam and through a maternal and child health project in Myanmar (previously Burma).

He was made an Officer of the Order of Australia (AO) in 2001 and is an Honoured Professor in the Kazakh National Medical University in the Republic of Kazakhstan.

In  2014, Professor Gracey took the time to speak with students at Parramatta Marist about his many years working in the field of Aboriginal and child health. Professor Michael Gracey was a great son of Parramatta Marist who made a significant difference in the lives of the poor and underprivileged (particularly children) here and across the world.

Go forth with strength into the next life Mick – you’ve more than earnt a spot in heaven! 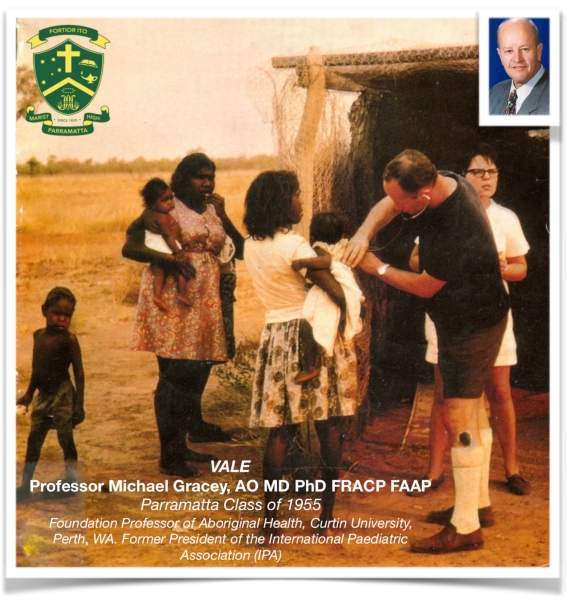